Laurence Hall Fowler (Sept. 5, 1876–June 12, 1971) was born in Catonsville to Mary Brinkley Fowler and Judge David Fowler. His grandfather was Robert W. Fowler, Treasurer of Maryland from 1862 to 1870. Fowler was raised in Towson and commuted downtown to Major Wilburn B. Hall’s School for Boys, a preparatory school for The Johns Hopkins University, the Naval Academy, and West Point.

Fowler obtained an undergraduate degree from Johns Hopkins in 1898 and a graduate degree in architecture from Columbia in 1902. At Columbia, in a curriculum based on the École des Beaux-Arts program in Paris, Fowler was greatly influenced by his teacher, William Robert Ware, who admired the medieval world, and McKim, Mead & White, who were completing the first stages of Columbia University in Morningside Heights at the time. Fowler’s thesis included a design of a beaux-arts courthouse with restrained classical proportions featuring the State of Maryland shield on its pediment.

After graduating from Columbia, Fowler worked briefly in New York with Bruce Price, designer of the residential community Tuxedo Park, New York, and later at Boring & Tilton, a firm rooted in beaux-arts classicism that designed many prestigious commissions, including the U.S. Immigration Station at Ellis Island.

At the urging of his father to become his own architect (and not the draughtsman of others), Fowler embarked in 1903 on a year-long trip to Italy and France to sketch buildings from antiquity and the Renaissance. He returned to Paris in 1904 and studied with the atelier Godefroy & Freynet, preparing for and passing the rigorous entrance examination into the École. However, Fowler abruptly returned to Baltimore for unknown reasons; perhaps the Great Fire of Baltimore in 1904 played a part in his decision.

In Baltimore, Fowler worked briefly for Wyatt & Nolting, a firm involved in the development of Roland Park and the rebuilding of downtown Baltimore. Fowler struck out on his own in late 1906 and ran his firm until his retirement in 1945. After leaving Wyatt & Nolting, he designed many small additions and minor alterations but was quickly able to secure more illustrious commissions with the help of former classmates at Hopkins and family connections.

Fowler’s work drew from a deep reverence for the historic, and he favored such revival styles as American Colonial, Georgian, Italianate, Jacobean, and Norman, coupled with the classical order and organization of the beaux-arts that can best be categorized as an eclectic style.

Fowler designed several important buildings, including the War Memorial on City Hall Plaza (1921), the John Work Garrett Library at Evergreen House (1922–41), and the Hall of Records in Annapolis (1934), but it is his approximately 80 residences throughout northern greater-Baltimore that demonstrate his truest examples of self-expression.

Fowler strove to harmonize the natural surroundings of his works with their interiors and exteriors to create complete works of art reflecting the wishes and personalities of his clients. He often selected furnishings for his clients’ interiors and incorporated many historic architectural elements salvaged from older buildings into his designs, including doors, fireplaces, stained glass, and wood paneling. Many of Fowler’s creations were built around mature trees or designed to open up to secret gardens of woods, brooks, and lush courtyards.

In the course of his career, Fowler amassed a collection of 448 historic architectural handbooks and treatises. During the period between the world wars, he became increasingly troubled by the large-scale destruction of historic architecture in Baltimore. The foresighted architect photographed a large selection of vernacular structures before they were demolished and created in some cases the only surviving visual records ofthe buildings. These invaluable collections (as well as Fowler’s architectural drawings) are held by The Johns Hopkins University today.

Fowler’s contributions to the area are innumerable. In addition to his work and collecting, he had a large influence on the aesthetics of Guilford and Roland Park as a member of the Architectural Review Board to the Roland Park Company (1927–1935). In addition, Fowler was a fellow of the American Institute of Architects (AIA), a member of the Municipal Art Commission, director of the Society for Preservation of Maryland Antiquities, founder of Baltimore’s first atelier, adjunct of the local Beaux-Arts Society, and trustee and member of the Building Committee of The Baltimore Museum of Art. 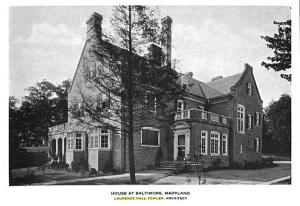 Fowler’s works located in Tuscany-Canterbury shed light on the man who worked and lived here from 1911 until his death. The range of designs reflects the architect’s restrained eclectic style and confidence. One of Fowler’s first major residential jobs (1911) was located on 39th  Street between University Parkway and Canterbury Road, known as the Shiff Sisters Residence and later the Ascot House (destroyed). From 1914 to 1916, Fowler designed a series of residences on Oak Place for William Bullock Clark (destroyed), Dr. John Howland, and the Misses Fowler (sisters Alice Silvie, Amelie, and Meta), cousins of the architect. 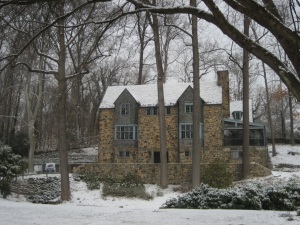 In 1924, Virgil Hillyer, headmaster of Calvert School and friend of Fowler, commissioned the Calvert School and four years later his private residence Castalia (1928), an Italian villa–style home named “after the spring at the foot of Mount Parnassas [sic] in Italy that is said to have been the inspiration for the muses.”

In 1925 Fowler designed what has been described as his most personal statement—his own residence on Highfield Road. Scholar Egon Verheyen stated it best: Fowler “was responding only to himself, not to any client, no matter how close he felt to him or her. The simplicity of the outside hides the elegance of the interior. The house is turned away from the street and opened to a small wooded area with a little brook running at the bottom of the hill. From there, Fowler had in front of him a collection of his houses, three early ones built on Oak Place, and from 1928 onward, also the one designed for Virgil Hillyer.” 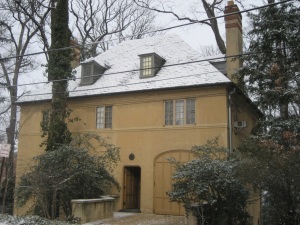 Sadly, numerous works by Fowler in Tuscany-Canterbury have been demolished over the years; extremely desirable land and economic opportunities have proven a powerful and destructive combination. In 2002, Eileen Higham, a team of residents, Preservation Maryland, and the Maryland Historical Trust secured Tuscany-Canterbury to the National Register of Historic Places. Most recently, in 2008, a battle was fought and won to save Fowler’s historic Castalia from demolition. A petition created by Tuscany-Canterbury residents and TCNA was supported by the Commission for Historical and Architectural Preservation (CHAP), leading to landmark status by the City. Challenges to Fowler’s legacy via urbanization will no doubt resurface in the future, and Tuscany-Canterbury must protect the priceless treasures of the renowned architect for future generations to come. It is our responsibility, and it is what Fowler would have wanted.